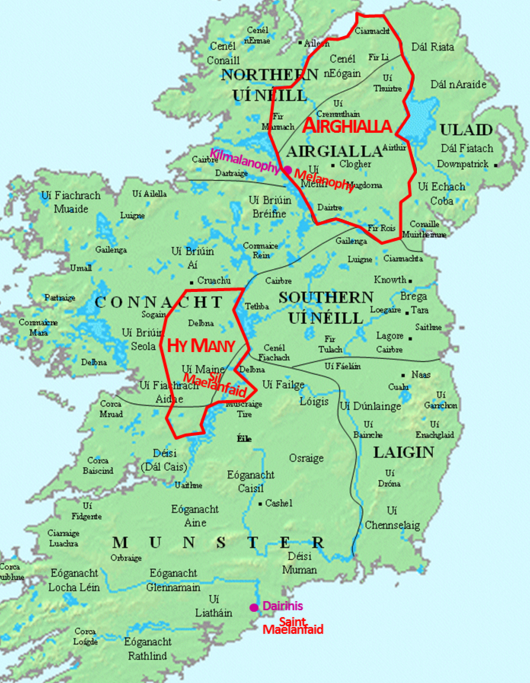 Please scroll down for more on the Maelanfaid.

The oldest Maelanfaid: In early medieval Ireland there were a several independent occurrences of the name Maelandfaid across the Provinces (kingdoms). Perhaps they may have been linked through reverence for the 6th century Saint Maelanfaid (a.k.a. St. Molanfide) of Molana-Dairinis abbey in Co. Waterford, Munster?  We may never know, although your participation in this Maelanfaid DNA program could help resolve this? See below for more on St. Maelanfaid.

Sil Maelanfaid ('seed of Maelanfaid'): Of these ten or so independent occurrences of the name, there were three notable clusters, one kindred called the Sil Maelanfaid  of Hy Many, who descended from a royal family member called Maelanfaid  mac Eochaidh. He was the great-grandson of Saint Aengus Loman, who was himself the son of Dallán, 5th King of Hy Many. Since Dallán was the grandson of Máine Mór the eponymous ancestor, a Prince from Ulster and founding King of the kingdom of Hy Many from the mid-late 300's AD, the Sil Maelanfaid  were descended from 6th century Saints and 4th century Kings! Maelanfaid mac Eochaidh lived around the year 700 AD and his Sil Maelanfaid became the famous O’Lomain of Gaela and Finnabhair (Finnure) near Loughrea, Co. Galway, Connaght (The Book of Hy Many introduces their pedigree thus: 'Now the Sil Maelanfaidh - Pedigree of O'Lomain'). As late as 951 AD the Annals fo the Four Masters report the O'Lomain's of Gaela (Sil Maelanfaid) as winning a victory over the Muscraige Tire and goes on to say a victoriy was also won over the Ui Failge of Birr. Muscraige Tire  is modern northern Tipperary and Birr is in modern Offaly (see adjacent map), which may explain the presence of Malanaphy's (and variant spellings of this name) in these areas.

The name Fahy, Fahey, O'Fahy, etc., are also descended from St. Aengus Loman and although not Maelanfaid they appear to be co-lateral kinsmen. Therefore, it will be interesting to compare our Maelanfaid DNA results with the separate Fahy DNA Program. ​​

​​Maelanfaid, progenitor of O'Duggan's of Hy Many: The Sil Maelanfaid are not to be confused with another, later, Maelanfaid mac Eoghan Fin of Hy Many who was the son of Eoghan Fin 13th King of Hy Many (progenitor of the famous O'Kelly king's of Hy Many). This Maelanfaid mac Eoghan Fin was the 3rd son and brother of kings. As such he may have become an ecclesiastic or other learned professional such as a poet / historian or brehon (lawyer). He was the progenitor of the O’Duibhghinn's from whom the famous 14th century seanachie (professional historian) Sean Mor O’Duibhghinn of Ballyduggan near Loughrea recorded his descent. Sean Mor oversaw the Book of Hy Many. The second cluster of Maelanfaid were domiciled around the townland of Kilmalanophy in Co. Fermanagh in the kingdom of Airghialla. Interestingly, the Hy Many assert they were Airghialla who migrated from Clogher (within 10 miles of Kilmelanphy townland) to Co. Galway in the 4th century. However, there may be a more direct Hy Many connection since O’Duibhginn (O’Dugain / Doogan) were a herenach family at the church of Inishkeen which is just 500 metres from Kilmalanophy townland. A herenach was a family, often from a leading kindred, expected to maintain church lands and support the bishop and clerics with proceeds from the land. The fact that the O’Duibhghinn's were descended from Maelanfaid mac Eoghan Fin and O’Duibhginn's were herenach's just 500 m from Kilmalanophy where the Fermanagh Melanophy's were domiciled is suggestive of a link for this second cluster of Maelanfaid to Hy Many. Peadar Livingstone in his 'The Fermanagh Story' reports six Melanophy voters in there in 1796 and 30 voters there in 1969, then name being variously spelled Melanophy, Mullanophy, Mallonaphy,etc.

Another reference to the O’Duggans is found in Keatings Histroy of Ireland: "O’Duibhghinn or O’Duigin, Chief of Muintir Conlochtaidh, a district in the parish of Tuamgraney, in the barony of Tullagh, is thus mentioned by O’Heerin:  “O’Duigin of fair and ruddy face, Rules over comely Muintir Conlochta, A chief who gained his possessions, By force of spears in battle.” This shows the O'Duggan's (descended from Maelanfaid mac Eoghan Fin as conquering and occupying lands in modern Co. Clare in the south-east part of Hy Many on the map above. This is at the south east corner of Lough Derg which separates modern counties Clare and Tipperary. Thus, Maelanfaid settled this area and may be another explanation for the occurrence of O'Duggan's and by inference possibly also Malanaphy's (and variants of the name) being located in counties Clare and Tipperary, if the Malanaphy's can be shown to be connected to the O'Duggans as opposed to the O'Lomain's / Sil Maelanfaid. It is somewhat suspect that the Book of Hy Many gives a detailed genealogy for the Siol Maelanfaid and also one for the MacEagans, the Hy Many Brehons shown to be descended from the Kings of Hy Many whereas for the O'Duibhagains, anther learned and supposedly royal lineage, the Book of Hy Many gives no genealogy at all. All the Book of Hy Many says is the O'Duibhagain's were descended from Maelanfaid who is claimed to be a 4th son of Eoghan Finn King of Hy Many and progenitor of the later O'Kelly princes of Hy Many who sponsored Sean Mor O'Dubhagain and the Book of Hy Many. This suspicious claim and lack of genealogy my be a case of pedigree faking whereby O'Dubhagain wished to more closely align himself with his patron. It may be that the O'Duibhagain's  are indeed from the Maelanfaid of the Siol Maelanfaid. Therefore it will be invaluable if O'Duggan's / Duggan's, Dugans, Doogan's with roots in Galway, NE Claire or N. Tipperary or Fermanagh were to take the Y-DNA test and join this Maelanfaid program since this would help answer this questions and also explain the repeated co-location of Mealanfaid's and O'Duibhagain's in Galway, Clare, and Fermanagh.

Both Maelanfaid mac Eochaidh of the Sil Maelandfaid and Maelanfaid mac Eoghan Fin of the O'Duibhghinn's (and by inference, the Fermanagh Melanophy's) share a common 5th and 6th generation descent, respectively, from Dallán, 5th King of Hy Many.

In summary, the Irish Maelanfaid appear to be derived from two or three separate kindred's in geographically dispersed regions of Ireland. These kindred's arose in the 8th C., whereas other great Irish names like O’Neill, O’Connor, O’Brian, Fitzgerald and Maguire did not arise until the 10th- 13th C. They were descended from Kings and Saints.

St. Maelanfaid origins and possible connections. In the Book of Munster he is ascribed a pedigree from the Eoghanacht Kings of Munster (ethnically Gael's). However, this could be a case of pedigree faking where notable persons or kindred's were given honorary pedigrees by being attached to high kings such as the Eoghanacht, Ui Neill, or Dal Cassians. Other sources, including Dr. Sherman, assign St. Maelanfaid and several other prominent ecclesiastics in his immediate kindred to the Osraige (ethnically Erainn, who gave their name to Eire the Irish language name for Ireland).

Around the end of the 5th century, perhaps only a few decades before the birth of St. Maelanfaid, some of these Osraige, the Manaig, fled Osraige to Airghialla where some settled as the Fir Manaig under the protection of St. Tighernach in modern Co. Fermanagh, which is named after them. St. Tighernach's father was from the Airghialla royal line of king Colla da Chrioch and his mother from the royal line of Osraige. At this time St. Maelanfaid was not born and the Hy Many had already left Airghialla some 100 years earlier but likely maintained close contacts given their royal status. Thus, the Airghialla had close contacts with Osraige facilitated by a leading ecclesiastic of his time. By the time of St. Maelanfaid's floret, his contemporary in Hy Many was St. Aengus Loman of Lough Gill who, as a contemporary of St. Columcille, was prominent enough to attend the Synod of Drumcete c.580 AD. Given these associations it is likely that St. Loman of Lough Gill and St. Maelanfaid were known to each other and may well have been associated. This St. Loman of Lough Gill is the Aengus Loman, mac Dallán who was the great-grand-father of Maelanfaid mac Eochaid of Sil Maelanfaid. Is it possible that Maelanfaid mac Eochaid's name was inspired by an association between Eochaid's grand-father and St. Maelanfaid?

Eligible Names for this program:  Given that some of the names above may come from different clan's or tribal groupings altogether, we respectfully ask that only those with names tied to Maelanfaid submit their DNA to this program. Thus, the following names are encouraged because Malanaphy, Malamphy, Molamphy, Mellamphy, Mullamphy, Melaniphy, Melanaphy, Molanphy are phonentically derived from Maelanfaid are therefore encouraged to participate irrespective of their origins. For the names O'Lemon, O'Lemmon, Lemon and Lemmon should only submit their DNA results to this program if they can trace their ancestors to Ireland. For the names O'Dugain, Doogan, Duggan those tracable to Galway, Clare, Tipperary, Offaly and Fermanagh  are encouraged to submit their DNA to this program because of the connection of these O'Duibhghinn's to Maelanfaid mac Eoghan Fi or the Siol Maelanfaid. Cunnigan's  and O’Cuineagan's are also encouraged to participate as they may be the modern descendants of one of the last recorded chiefs of the Siol Maelanfaid. Anyone with derivatives of the name Phelan, Whelan, Brick, Tracy, Gorman, Cairney, Ronan, Teague / Teage, Cullen, Fitzpatrick, Gilpatrick, Brennan, Byrne, Toole, MacFaelan, Dermot / FitzDermot, Cosgrave or Cosgrove.

If you trace your O'Dugain, Doogan, Duggan  name to Co. Cork you are probably from a different tribal grouping and are respectfully asked not to submit to this program but to any program that addresses the Munster or Eoghanacht tribes and in particular those from the tribal group Fir Maighe who were centred around Fermoy, Cork. If you name is  Duignan, Deignan or Dignan this is not the same as Duggan, Doogan and you are respectfully asked not to sumbit your DNA to this program, but to the any programs that might address the Gaels of Ui Bruin and in particular the O'Duigenan, O'Duibhgeannain of Kilronan, Co. Roscommon.